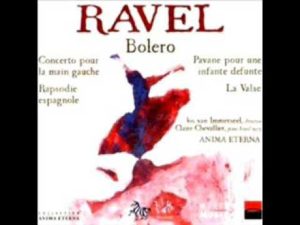 Boléro is a one-movement orchestral piece by the French composer Maurice Ravel (1875–1937).

Originally composed as a ballet commissioned by Russian actress and dancer Ida Rubinstein, the piece, which premiered in 1928, is Ravel’s most famous musical composition.

Boléro epitomizes Ravel’s preoccupation with restyling and reinventing dance movements. It was also one of the last pieces he composed before illness forced him into retirement.

The work had its genesis in a commission from the dancer Ida Rubinstein, who asked Ravel to make an orchestral transcription of six pieces from Isaac Albéniz’s set of piano pieces, Iberia.[2] While working on the transcription, Ravel was informed that the movements had already been orchestrated by Spanish conductor Enrique Fernández Arbós, and that copyright law prevented any other arrangement from being made.[2] When Arbós heard of this, he said he would happily waive his rights and allow Ravel to orchestrate the pieces.[2] However, Ravel changed his mind and decided initially to orchestrate one of his own works.[2] He then changed his mind again and decided to write a completely new piece based on the musical form and Spanish dance called bolero.

This piece was initially called Fandango, but its title was soon changed to “Boléro”. According to the Sufi writer Idries Shah, the main melody is adapted from a melody composed for and used in Sufi training.

This piece’s copyright expired on 1 May 2016 for many countries, but not worldwide.