The “Fading lights, the cross over from candle to LED” project researches historical lighting methods. When doing so, the focus lies on the influence on the light image caused by the transition from one technology to the next.

This research project fits in the broader context of the history of technical theatre. It builds on the research project “Changement à Vue” that was conducted by the Expertise Centre in collaboration with the Swedish university Uniarts Stockholm. The focus here has shifted to the use of lighting.

In the previous PWO period, when working on the “Changement à Vue” project, we focused on the history of stage mechanics. From there, we developed a vision on a “language of movement” that clarifies the meaning of movement on stage and that updates the relation between the executing technician (operator) and the designer. We developed tools, such as the 1:4 scale theatre, that students and professionals can use to actively concretise this vision in a current day context.

In the current project, we want to broaden or shift the focus to the history of lighting. We would like to specifically examine how the physical circumstances and technical possibilities influenced the performance in all its aspects. After all, light influences the acting, sets, costumes, make up, the perception of the audience and the visual quality of the performance. Our starting point is the point of view of the technician/operator.

The goal is mostly to react to today’s practice, where new technologies such as LED and projection pose new challenges for the theatre maker. Technical parameters such as colour temperature, spectral division, amberdrift, spreading,… are not the only things being questioned by the introduction of these new techniques, but the interfacing – the connection between the operator and light as matter – require new insights as well.

The concrete research questions can be defined as followed:

Within this research project, we wish to further expand the methodology developed in the “Changement à Vue” project. Starting from desk- and field research, we define several benchmarks. Afterwards by means of “research by doing”, we reconstruct the technology on scale or virtually, and test it to the reality of the different stage disciplines.

To do this, we collaborate with other researchers from our field (both academic and non-academic). In the final fase of the research we also include specialists from other disciplines.

On line presentation for the OISTAT Lighting Design Working Group. 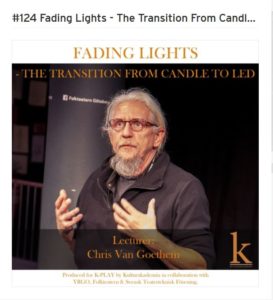